The FinTech revolution – regards from Africa

Johannesburg, South Africa – Africa has leapfrogged the rest of the world! From unbanked to almost fully connected in a few years. It has achieved this phenomenal feat without the use of the traditional retail-banking model but rather by disrupting convention: using innovation and creativity – resulting in the birth of FinTech. 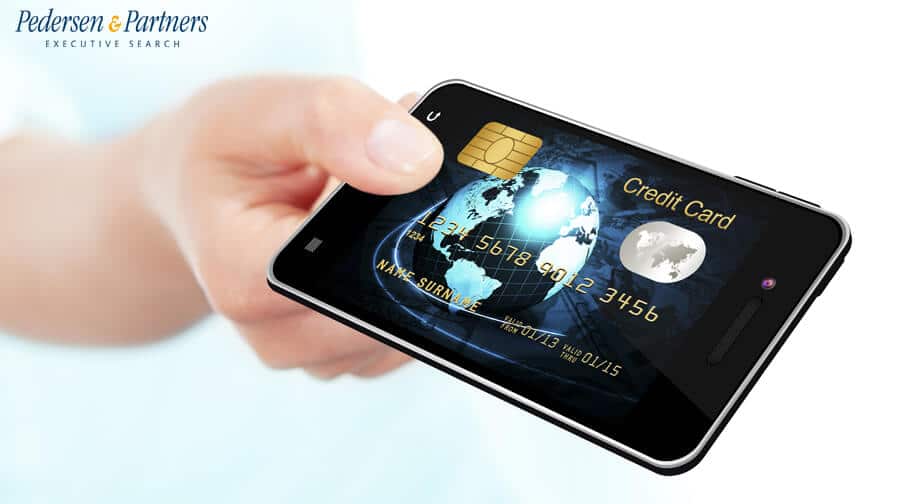 The M-Pesa launch in 2007 has transformed how money is changing hands in East Africa, and slowly but surely the rest of the world is waking up to this new and inspired way of handling money that was first introduced here.

After M-Pesa, FinTech solutions were generally first adapted and utilised in emerging markets, where there was a real need for financial inclusion and participation. In Bangladesh for example, where only 15% of the population was banked, bKash – a simple money sending platform using basic sms technology – was launched in July 2011, and it spread like a wildfire. Just 30 months after launching, it had 11 million account holders.

Microfinance and crowdfunding companies using FinTech platforms specifically designed for these vehicles have also sprung up all over the developing world, assisting Indian women in setting up their own businesses, and helping Tanzanian entrepreneurs realise their business ideas.

And the idea and scope of implementation keep getting larger: Africa’s first “unicorn” (billion-dollar tech IPO) on a major exchange seems imminent: Nigerian digital payments company Interswitch, a platform that provides much of Nigeria’s digital finance infrastructure, will likely go public on the London Stock Exchange (LSE) later this year.

By now though, this is no longer a 3rd world phenomenon; there are thousands of examples of creative new technologies that are simple and fast to operate and appeal to the global masses, like PayPal – a platform that in just a few years has achieved immense worldwide success. Some other examples are Transferwise, an international money transfer platform with low to no fees (dreamt up in Estonia), and GetBucks, a Luxembourg headquartered Consumer Lending platform now operating in 10 countries across Africa and Europe.

The concept of FinTech has by now evolved to include an extremely wide variety of money-themed businesses. From very basic ideas like the East African start-up M-KOPA, an innovative sms-driven platform that enables rural dwellers to purchase stored solar energy on a pay-as-you-go basis, to massive global initiatives like WorldRemit, a well-funded low cost UK initiative that is proving to be very successful at competing with the global off-line money transfer giants, or MoneyForward, a Japanese personal accounting app that scrapes your web-based accounts and gives you real time information about your finances. 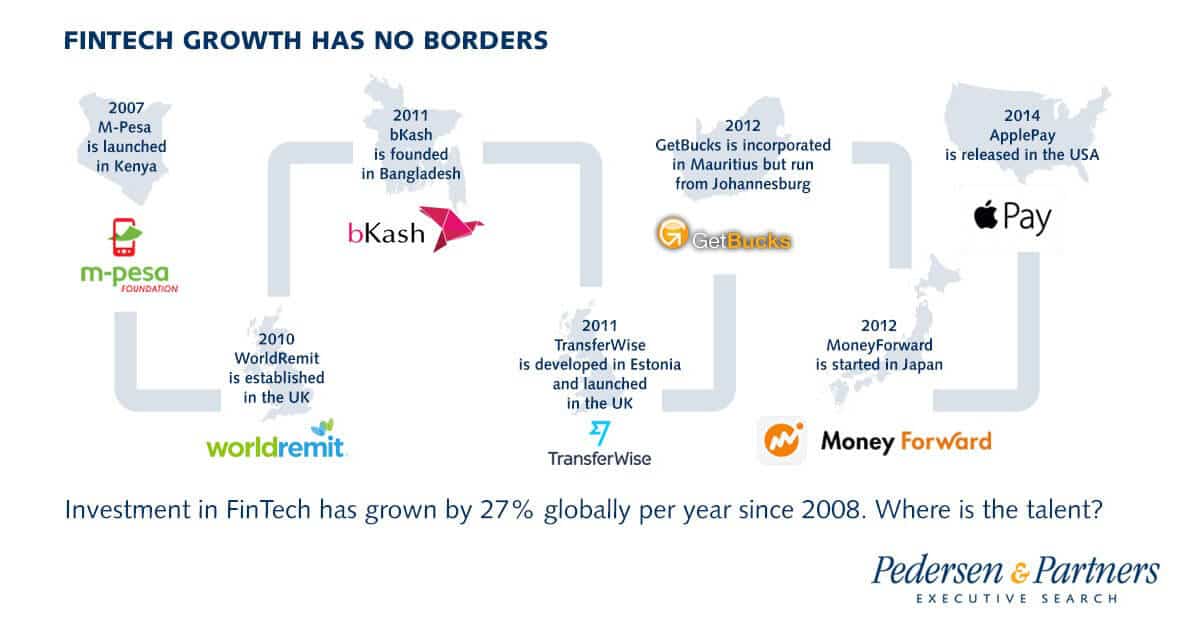 The newest addition with the most potential? ApplePay – probably the most promising payment platform yet, in terms of exposure and applicability across geographies.

It is great to observe Africa setting the scene and inspiring the rest of the world; new milestones are achieved on the continent every day and the story is still very much driven from here, not least in terms of defining talent. What will be the skill set and attitude needed to succeed in tomorrow’s banking world?

While some of the companies pushing FinTech forward are banks, most are not. Most are either derived from the IT or the Telecoms sectors, and this presents a conundrum in terms of identifying top talent. Most retail bankers are still of a traditional mindset, while most IT professionals are not financially-inclined. However, there is a growing group of in-between professionals who are focused on the opportunities of this burgeoning sector at a high level, and this group is largely based in Africa but is rather global in nature.

The fact is that FinTech is one of the few sectors able to attract global top talent to the continent, and top executives will now consider a move to an African country with excitement and enthusiasm, not with hesitation and demands for hardship compensation. They are increasingly choosing to come here as Africa is by virtue of history viewed as the trailblazer for the sector, and hence if you are planning to make a career in this field, it is seen as very beneficial to have an Africa posting on your CV.

Although FinTech seems to be the buzzword on Wall Street and in the City of London these days, the global bulge bracket banks are rather slow in responding, and no one there seems to know exactly what it encompasses. A feeling of trepidation is in the air – a feeling that change is imminent. Navigating this territory will be a big challenge for them: their current IT infrastructure is massive, inflexible and “old fashioned.” It has evolved in layers over many years and will need a complete overhaul in order to be competitive with the start-ups that are currently setting the tone.

The number one challenge that the big global banks are facing is finding the right talent to lead this overhaul, and the talent pool best equipped to take on this massive task is currently sitting in the developing world – mainly in Africa.

Understanding the complexities of how to make FinTech work to their advantage is what will make the difference for the international players in the competition to attract great talent. As the transformation of a virtually non-existent sector into a multi-billion-dollar one has happened at such a whirlwind speed, it requires extensive market know-how to identify the skills and drivers at play, and the people behind it.

The world of finance is changing fast and it is people who are driving this change. Having easy access to the growing network of talented professionals who have successfully explored the blurred lines between banking and technology will be a pivotal advantage in the race to secure inclusion, influence and success in the future of banking and finance, in Africa and worldwide. 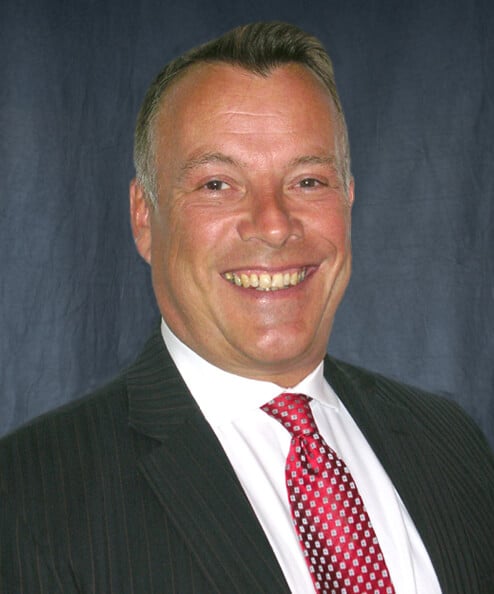 Frank Behrendt is a Principal at Pedersen & Partners and is the Head of the Financial Services Practice Group Africa. Mr. Behrendt is an emerging markets specialist and has originated and executed senior level searches for banks and financial institutions across Asia Pacific while based in Singapore, and Pan-Africa from London and Johannesburg. After spending four years in Singapore managing a team of recruiters in Equities and Asset Management, he returned to Europe in 2009 to run the London office of a UK-based Financial Services search firm with global reach, which is where he developed a passion for Africa and started working on African search mandates. In 2011 he joined a boutique search firm with offices in London and Kuala Lumpur, with an exclusive focus on the African Financial Services sector, including corporate and investment banking, corporate and project finance, asset management, private equity, venture capital micro-finance and insurance, first based out of London and since 2013 from Johannesburg where he successfully opened and ran a new office in order to expand the business into other sectors relevant for Africa’s growth (IT and Energy), but more importantly to be closer to his Pan-Africa clients based in Johannesburg.

Mr. Behrendt draws on over ten years of experience at the senior end of emerging markets Financial Services recruitment, the last four and a half focusing exclusively on Africa, and has an impressive track record of placements in many African countries including Nigeria, Kenya, Zambia, Uganda, Namibia, Botswana, Mozambique, Angola, Ghana and South Africa. Apart from his native Danish, he speaks fluent English and German, and is conversant in Dutch, Norwegian, Swedish and Spanish.