Pranvera Papamihali, Country Manager for Albania at Pedersen & Partners, recently appeared on the Monitor Economy TV program broadcast on the News24 Albania TV channel to discuss gender equality issues. We present a summary of her remarks below. 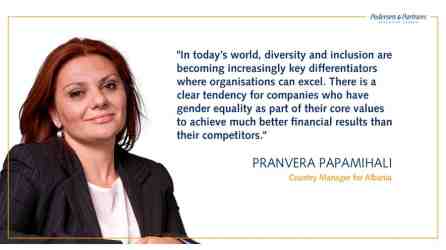 There is a widely-recognised concern that women are under-represented in leadership roles – the higher up the leadership pyramid you go, the fewer female executives you see. There are several reasons for this; for example, women are less likely to accept frequent travel or relocation, which can be crucial if you want to take on top executive roles.

These phenomena vary from sector to sector. Heavy industry is more male-oriented, while finance and banking are more female-oriented; marketing management roles are occupied mostly by women who are presumed to have a stronger sense of empathy, creativity, and sensitivity, while retail sales management roles are held mostly by men, given their strong field involvement. Telecommunication as a whole is more balanced, but with more male presence in the technology divisions and more women in administration roles. This relates to the greater tendency of men to have an engineering background, whether in IT, civil, mechanical or electrical engineering.

The gender pay gap is a well-known issue, with men on average being paid around 15% more than women. Women often suffer from career gaps due to caring for children and elderly relatives, although parental leave is intended to redress the balance. However, I have handled many assignments for top and mid-level managerial roles in my thirteen years of executive search experience at Pedersen & Partners, and my observation is that executive compensation is more closely related to the seniority of professionals, and the position under discussion, rather than to the fact of an executive’s gender per se. There may be a tendency for women to prioritise healthy work environments, with a strong team spirit and respect among colleagues, over lucrative compensation packages.

On a global level, governments and societies are attempting to tackle these inequalities. For example, in Ireland, companies with more than 25 employees are obliged to obtain government certification for their equal pay policies, and in Norway, public listed companies must have at least 40% women on the board of directors. Albania is ranked number 20th out of 153 countries in the Global Gender Gap report issued in 2020 by the Global Economic Forum, which puts it among the top countries in the region. This reflects the most significant progress of any country – one year ago, Albania was 14 places further down the ranks.